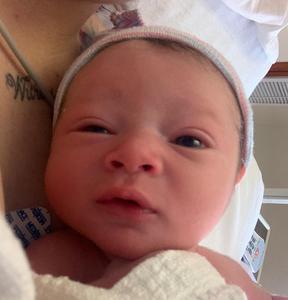 She had kept her OB appointment with me.  At the end of the appointment I asked her if everything was OK.  She said yes. I asked if the baby is moving well, as I do at every OB patient visit.  She said that the baby was not moving as much as it normally does.  I took her to the NST room and connected her to the fetal monitor.  Minutes later I heard the monitor alarm go off and went to investigate.  What I saw on the tracing was a Category 3 tracing indicating that the baby was in distress.

I immediately sent her to the hospital with her mother for an emergency cesarean delivery.  I arrived ahead of her and had called the charge nurse on the way to let them know we were coming so they could prepare for immediate delivery.  Shortly after her arrival we had her ready for the OR and the baby was delivered.  During this brief preparatory time the fetal heart rate remained Category 3.  At delivery I found a tight cord around the neck of the baby and there was meconium.  The baby did fine and did not have to go to the NICU.  It was a miracle.  We had avoided a stillbirth.  If the patient had been seen a few hours later or had she not been brought back to the office that day, it is likely that baby would have been stillborn.

This patient and her baby were lucky.  She almost had a stillborn baby.  I had seen her the day before and asked her to come back for re-examination.  She had a great team at MedStar Harbor Hospital that got her to the OR as fast as possible.  My patients have my cell phone number to call anytime of day for situations like this. But for whatever reason(s) patients often will not contact, or delay contacting, their OB doctor for decreased or absent fetal movement.

So I write about this case to remind pregnant women to be vigilant.

A stillbirth is the death of a viable baby before delivery. According to the CDC (Centers for Disease Control) a stillbirth occurs in about 1 of 100 deliveries.  I would ask everyone reading this to discuss this with family and friends.

What causes a stillborn is sometimes obvious, like a tight cord around the neck of the baby or a true knot in the cord, but it could be a blood clot in the brain or an undetected infection.  A reason for the stillbirth is not found in a large percentage of cases, even with autopsy.

Pregnant women in particular should do the following:

2. Call their OB doctor or go to the hospital AS SOON AS POSSIBLE for decreased or absent fetal movement.

3. Avoid going past 40 weeks to deliver as the stillbirth rate starts to increase at this point.

4. Keep your OB appointments!  This is a reason OB doctors have you visit more frequently in the third trimester.

A stillborn term infant is a terrible thing to happen to a woman and to all involved with the pregnancy.  While stillbirth is rarely preventable, even with the above guidelines, you can try to minimize the odds that it will happen to your pregnancy.  It is up to you to monitor your baby and call your OB doctor with ANY concerns.